On the Eve of Lunar (Chinese) New Year, my wife cooked a delicious dinner for the two of us, and we had an enjoyable, peaceful time. 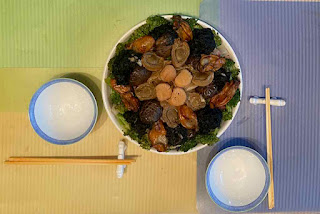 At the same time, we missed our three daughters, who have all moved away from home, from Hong Kong.  How we would love to have them with us for the dinner, to be home. 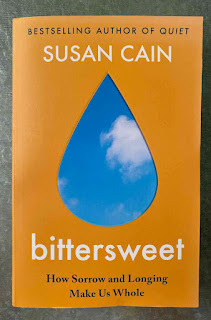 We are sad that they are not home in person.  But we are happy that they are safe, free and pursuing their dreams.  That we are still bonded.

Here is looking at you - Rising Eye

This is the latest piece of Palm Art coming out of my workshop.  One of the most satisfying pieces.

Take a think piece of palm leaf, flatten it out a little by soaking it in water to soften it, shaping it, and then drying it out while keeping it flattened.

Cut a set of concentric rings from the piece of palm with a very thin hand saw (fret saw).  Make the cut slanted by about 10 degrees so that the rings do not fall out of the original plate even when the ring is completely cut. 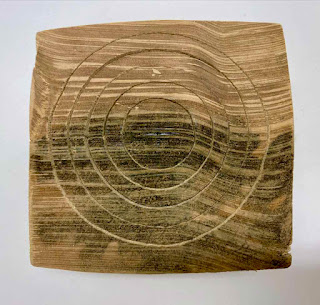 Elevate the set of rings in the plate to prepare for the final act. 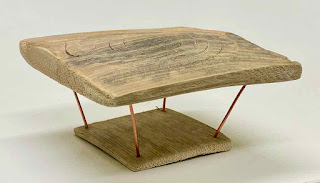 Starting from the largest ring on the outside, slide each ring slightly up and out on one side, down and in on the opposite side.  At the end of the process, the last and smallest piece (actually just a disk, not really a ring) - the eye - is almost vertical. 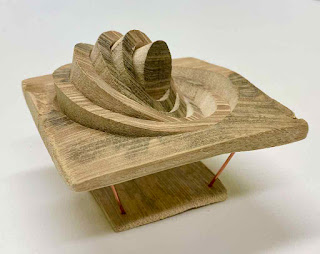 Here - the eye rising out of the frame - is looking at you.

Traditionally, most businesses are closed for Lunar New Year.  Some for 3, 4, 5 days, or even longer.  Today, however, as I ran through Tsim Sha Tsui, Yau Ma Tei and Mongkok,  some businesses are open, including convenience stores, fast food restaurants, fruit and vegetable vendors, …, and Mr. So’s roasted chestnut cart. 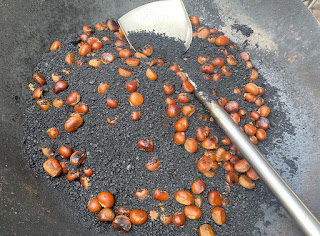 Summer is too hot for roasted chestnuts.  But he works every single day through autumn, winter and spring.  Yesterday being New Year’s Eve, he worked late.  Hence he started the day later than usual today. 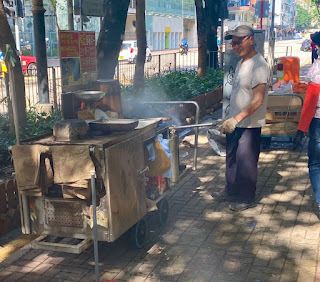 When I ran by him this morning, he was getting ready. Adding sugar to the black sand used to roast the chestnuts.  Putting the sweet potatoes over the charcoal fire.  Too bad the sweet potato wasn’t ready.  Piping hot sweet potato is a real treat on a cold winter morning.  The color, the aroma, the sweet taste - it is heaven. 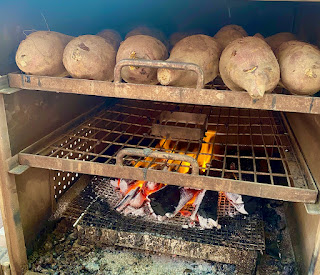 Other than the roasted chestnuts and the potatoes, I also like the roasted peanuts.  Big, crunchy and sweet.  Simple, inexpensive pleasures.

He is very hard working.  I pray that he does good business today.  And tomorrow, …  Good health to him and his wife.

Late afternoon on Lunar New Year’s Eve, there are lots of people on the street.

People are buying big fat geese for family dinner, one of the most important meals of the year.

Others are buying seafood.  “This fish is eight hundred dollars.  That one is one thousand.”  “What do you think?  It is from the sea.  That alone is worth several hundred.”  Any other day, you can probably get that fish for half the money.  But this is New Year’s Eve. Most of the fish mongers are closed already.  One is lucky to find someone still open, with live fish to sell.

Some are going to the temple to pay back their debts.  Many people go to the temple at New Year to “borrow” from the goddess Kwan Yin, hoping for good fortune during the year.  At the end of the year they have to repay the “debt”.  So that they can borrow again in the New Year.  It does sound logical, doesn’t it.

It almost looks like a normal Lunar New Year’s Eve.  We all hope that it does return to normal.  Even though, come to think of it, “normal” before the pandemic wasn’t really that good.  It seems people are really desperate now.

When I woke up this morning, it was too early to get out of bed, but I could not go back to sleep anymore.  So I prayed, as my usual practice, for 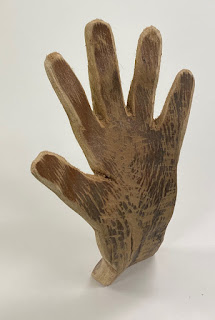 a couple whose son is having some difficulties with school,

a friend and her mother who are recovering from covid,

a friend whose mother is struggling with a long-term, serious illness,

a young lady who was compelled to leave her homeland due to political reasons,

some people I deeply respect who are in jail for political reasons,

a couple who are working hard to establish a small business,

some people working hard to make an honest living after the social unrest,

some children in poverty in a very poor African country that I am sponsoring,

many families who feel compelled to leave Hong Kong for various reasons,

missionaries dealing with health and family issues while working in a poor country,

people in positions of authority,

until I really could not stay in bed any longer, and got up.

Our Spring Book Club has been discussing the issue raised in Jonathan Haidt’s book, “The Righteous Mind - Why Good People are divided by Politics and religion”.  His premise is that people generally agree on the fundamental dimensions of morality: care, liberty, fairness, loyalty, authority and sanctity.  Where people differ are the relative weightings assigned to each of the dimensions by each person, or group of people.  For example, Liberals may consider all 6 dimensions valuable, but highlight particularly care, liberty and fairness more than others.  On he other hand, conservatives may put more emphasis on loyalty, authority and sanctity. Those differences in relative weighting is the cause of much of the conflict between liberals and conservatives, and many groups.

We feel that Haidt’s analysis sounds plausible, providing valuable insight into some of the serious conflicts that afflicts many countries and communities today.  However, there is also a feeling that some important elements are missing from his analysis.  Perhaps partly because his analysis is based on observations on the community that he is living in, in North America.  One of the glaring gaps is the absence of the analysis on authoritarianism, which dominates many countries and communities.  We feel that, in the context of Haidt’s framework, authoritarians put even more emphasis (than the conservatives) on loyalty and authority, maybe even sanctity. 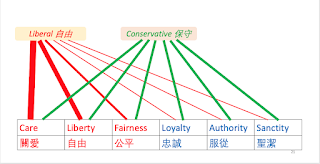 We also feel Haidt has not gone far enough in analysing the degree of violence that may result from the differences and conflicts among the groups.  If the struggle among groups remain in the form of arguments, elections and other civil and lawful arenas, the world would not have been in such a terrible place.  But there are discriminations, exploitations, political and economical oppressions, police brutalities, arbitrary detentions, forced exiles, assassinations, killings, wars and more.  Evil is so evident.  It is no more just divisions among “good” people. 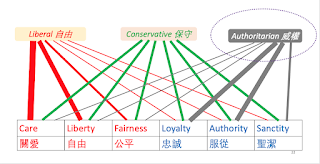 That leads to the solution offered by Haidt.  He recommends listening to the other side, meeting people from diverse backgrounds, trying to understand why people hold different views even when we disagree with them.  There is much research that points to the benefits of such exposure.  It is harder to hate someone that you know and feel connected to.  It also helps to counteract some of the worrying effects of social media.  That is also part of the motivation behind service-learning, particularly international service-learning that is so much a part of my life.  Haidt himself is true to his words.  He has put much efforts towards promoting mutual listening, understanding and dialogue. 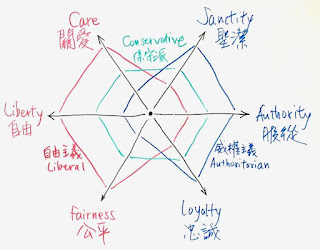 But ultimately, these actions seem unequal to the depth of the conflict.  The hatred between some of the antagonists, the evil that has been and continuously perpetuated is so deep, that these action has no realistic hope of removing.  Great misery and evil can also be tackled with great love and sacrifice.  Such as that exemplified by Jesus Christ.  I have heard that the blood bath expected in South Africa when apartheid was abolished was averted at least partly because of the faith of some of the key people as well as the large number of believers in the country.  The way the Rwandans are stressing reconciliation after that horrible genocide in 1994 is also at least partly attributable to the Christian faith giving the strength to many of them to forgive.  I feel the hand of providence that somehow our team at the university is involved in projects in both countries.

I truly believe that the Christian faith has a lot to contribute towards healing this world.  Christ sacrificed Himself for me, but also for him, her and them, everyone, near and far. What does it mean to imitate Christ if I care only for myself and those who are like me?

Roasted chestnuts, sweet potatoes, peanuts, … - these are some of my favourite street foods. 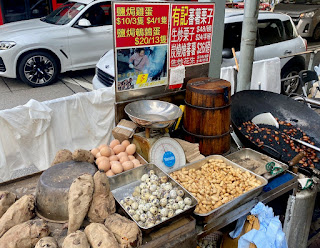 I have been eating them, liking them, since I was a child, when choices were much fewer, and we could barely afford them. 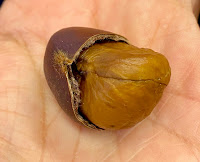 Now that we are spoilt with the tremendous range and variety of foods available, and I can finally afford many of them, these remain some of my favourites.  Such is the power of childhood memories. 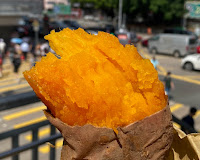 My wife and children do not share many of my preferences for such street food.  Perhaps because they have different childhoods and grow up with different foods and memories.  Perhaps we are just different.  It makes me slightly sad, since we cannot share some of my joy.  But such cannot be helped.  Perhaps that also makes life less monotonous and more interesting?