A young lady collapsed on the ground, at a busy corner on campus.  Three young male students found her lying on the ground, face up.  They didn’t know her. They were concerned but didn’t know what they should do.  Campus security was alerted and consequently, so was the university health clinic.  A couple of nurses rushed to her side.  It appeared that she might have lost consciousness and was having seizures.  The nurse gently rowed her on her side, and gave her oxygen. After a while, it appeared that she was conscious and was able to respond to the nurse. 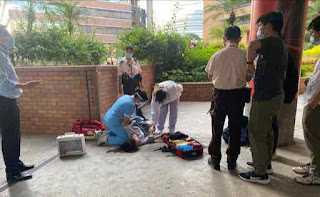 A couple of lady students, passing by, seemed to recognise the lady on the ground.  They called another person, who called the lady’s phone, verifying her identity.  She seemed to be an undergraduate student studying at one of the academic departments.  It seemed that she might have some health issues known to the public hospitals.

An ambulance was called.  A gate to the campus had to be opened to let the ambulance reach the spot where the lady was.  In a few minutes, the ambulance was there.  A doctor from the clinic came.  The lady was moved to the ambulance.  The atmosphere seemed calm.  Perhaps the lady had stabilised.  Later, it seemed that she was taken to the hospital.  We pray and trust that she is taken care of.

Each of us have their own story, and needs that may or may not be obvious on the surface.  Let us all try to be kind to each other.